“We are saving roughly $75,000 a year by taking over control of IT with SYSPRO. This amounts to roughly 12 – 24 man hours per week. We expect to double these time savings once we maximize SYSPRO’s functionalities. It has been a very worthwhile investment.”

– Matt Cable, Secretary of the Board, Bug-O Systems

Bug-O Systems, a division of the Weld Tooling Corporation, is a family-owned business that began operations with the invention of the single Livesay Multipurpose Machine in 1943 to help automate the cutting and welding process involved in the manufacturing of landing craft for World War II.

Since that time, the company, headquartered in Canonsburg, Pennsylvania, has evolved to become a global leader in the design, manufacture and application of several lines of portable automation products for the cutting and welding industry — from small projects to cross-country pipelines around the world.

Bug-O units have been used in numerous high-profile projects, the latest of which was the welding circumference of 10 diameter pilings and the cutting of slots in inner and outer piling for the replacement sections of the San Francisco/Oakland Bay Bridge.

Today, Bug-O products are differentiated by quality and reliability. The company has a roster of more than 3,000 customers primarily involved in fabrication, construction and shipbuilding. Bug-O sells through more than 1,500 US distributors plus a similar number worldwide, and fills approximately 850 orders a month from one inventory warehouse. The company also manufactures special machines for specific applications.

The company’s software, which was operational for more than 16 years, was designed only to expedite sales. After continually tweaking the software to make it applicable to engineering and manufacturing, the company deemed it advisable to enhance overall operational efficiency via the purchase and implementation of an Enterprise Resource Planning (ERP) solution.

After extensive examination of a number of ERP packages, including those offered by Epicor, Bug-O selected SYSPRO ERP. Important factors involved in the decision were price, functionality and ease-of-use. Also critical in the selection process were the extensive demonstrations done by both SYSPRO and Cogistix, the local SYSPRO reseller.

Matt Cable, Bug-O Secretary of the Board, says SYSPRO has significantly improved operational co-ordination between manufacturing and other company units. “Though we are not yet utilizing all the functionality inherent in the SYSPRO solution, we are gaining an in-depth picture of the company’s accounting practices. We also anticipate significant improvement in other areas such as sales, contacts, documentation and version control.”

The software has helped Bug-O to compete by providing a better picture of the company’s true costs. This enables Bug-O to be more price competitive when bidding for a job.

Furthermore, SYSPRO has significantly reduced the amount of processing time to get orders to manufacturing, thereby reducing lead times and greatly enhancing customer service through the ability to meet customer requested delivery dates. Cable adds that Bug-O has experienced significant cost savings by assuming all IT functionality in-house and no longer having to depend on outside services. 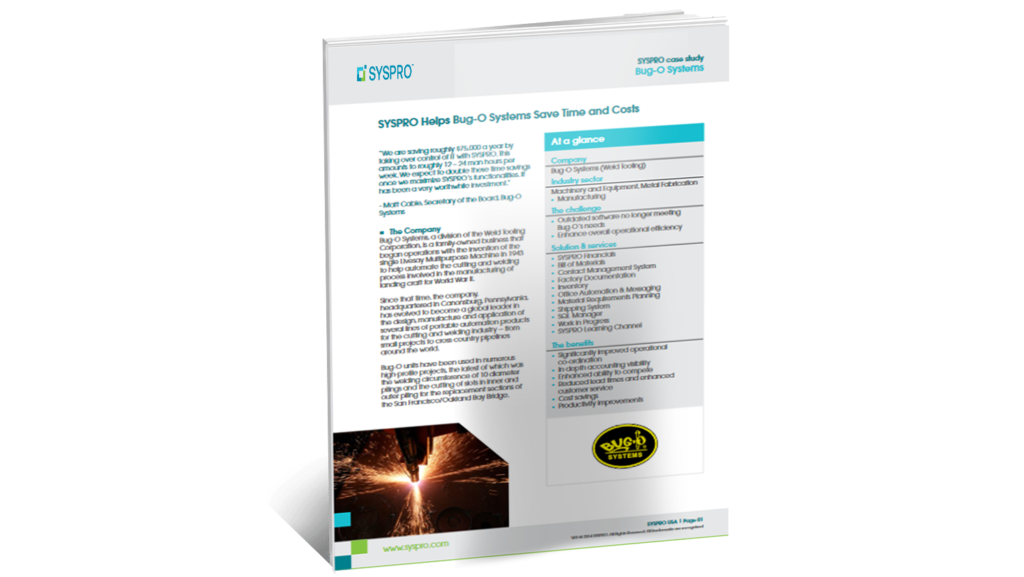