“Distell’s strategy of deploying SYSPRO as its standard ERP solution throughout its Africa operations has enabled us to integrate all our systems and data on a single platform.”

The Business Challenge
When the Distell Group acquired a majority share in KWAL in 2017, KWAL embarked on a journey to transform its ERP system in line with Distell’s strategy to integrate all its systems and data on a single platform.

The Solution
KWAL implemented SYSPRO 8 in March 2020, providing Distell with full visibility across all areas of the business and aligning the two organizations’ financial environments in terms of access to products and customer information.

The Outcome
SYSPRO is playing a pivotal role in KWAL’s renewed vision of being the preferred provider of quality beverages in East Africa and beyond. The company has an established countrywide branch network and is currently repositioning itself to grow its market share.Joshua Koskei, KWAL’s ICT Manager, says: “We have enjoyed a successful business partnership with Distell, Africa’s leading producer and manufacturers of spirits, fine wines, ciders and ready-to-drinks, since 1997. Once Distell acquired a majority shareholding, the positive growth experienced by KWAL meant that Distell needed more frequent, in-depth visibility into our operations.“Distell’s strategy of deploying SYSPRO as its standard ERP solution throughout all of its Africa operations has provided us with full integration of all our systems and data on a single platform.”

Improved Production and Costing
KWAL has benefited from SYSPRO’s ease of use and the ability to monitor costs more effectively.“We now have standard costing practices across the group,” Koskei says. “This has improved the integration of the Rest of Africa businesses into Distell’s head office operation in South Africa. “SYSPRO has also significantly improved our productivity. By giving us more active control of our production costs and improved visibility into our operation, SYSPRO is paving the way for us to increase our profits.”In addition, SYSPRO has enabled a single repository of data to be built, and this has made monthly reporting and consolidation across the group far easier. 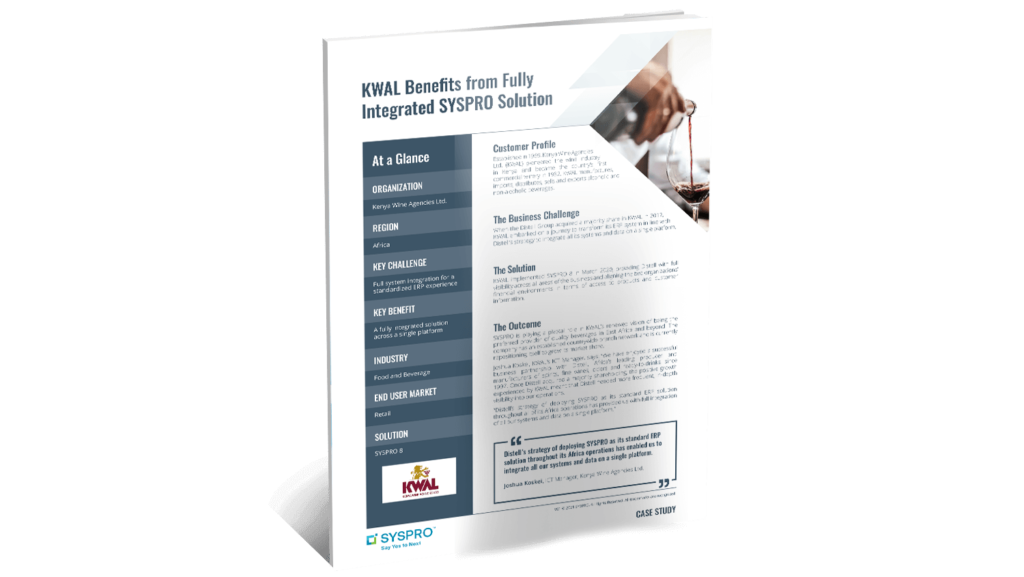