“The difference has been astounding. We are no longer spending a fortune on consultants and IT support just to keep the system running, like we were with Oracle. We are no longer battling our own customizations. This partnership is beyond compare.”

For more than 60 years, Prudential Lighting has engineered and produced high-quality fluorescent luminaires in the USA. Whether it’s collaborating with leading architects and lighting designers on a new treatment, or refining a classic design, Prudential is driven by innovation. Its national network of sales representatives is among the most knowledgeable and service-oriented in the lighting industry.

Prudential’s first ERP implementation was with Oracle. The fit was never ideal as they constantly felt like the small fish in a very large Tier 1 ERP pool. They poured a lot of money into consultation and customization fees and seldom lasted a week without a system crash or other incident requiring assistance from the consultants. In 2010, Prudential realized that the system was no longer meeting their needs and they began researching alternate ERP solutions.

While researching ERP companies, Prudential found SYSPRO through an Internet search. They made contact and set up a Joint Application Development (JAD) session with the implementation team. They were sold by the level of professionalism and commitment to understanding their business displayed by the SYSPRO team.

Working with the implementation team, Prudential was able to set up the system, scrub and then convert data from their existing ERP into SYSPRO, implement a bar coding and handheld solution and train users in just four months.

Within the first week, it was apparent that the right choice had been made. There are no longer exorbitant consultant and IT support costs to keep the system running. SYSPRO allows Prudential the freedom to do business and have a system working for them rather than working to make the system function.

A Surplus of Stock Codes

Prudential Lighting offers a wide range of catalogued parts with a huge amount of options for every fixture. They also offer custom luminaires designed in partnership with their customers. This has led to a daunting number of stock codes. SYSPRO worked with Prudential to organize the data and help the company come up with ways to maintain counts and organize over 140,000 stock codes.

Due to the variety in the catalogue and their make-to-order environment, the business required a solution to enter their orders without sorting through thousands of stock codes. Product Configurator was selected to address this challenge.

“We have a unique method of creating the descriptions we use for our products which consists  of  horizontally  concatenating  all of the options that the customer has chosen into one unique description for  that product,” says Prudential’s Systems Analyst, Jaime Ditterline. “This was not something that appeared to be immediately available using SYSPRO. We found that by thinking outside of the box, we were able to utilize what was in the box with SYSPRO. The customer is not expected to bend to the software; the team at SYSPRO is always up to the challenge of making the software work for the customer.”

Part of Prudential’s issue with Oracle was that it had a license structure that was   not friendly to the mid-size or smaller manufacturer. Rather than a concurrent user structure, it utilized a named user structure. For a smaller company  that  had been set up on the system many years before without an in-house person dedicated to its maintenance, this was a disaster.

Prudential ended up with many users named for modules that had never used the module, users that had left the company, and users that needed temporary access that had never been removed as a named user. Each one required a license fee every year, for each module. It became so cost prohibitive that a new system became the only alternative.

Prudential was impressed that SYSPRO’s approach to business is completely different from other Tier 1 vendors.

“No customer is a small fish to SYSPRO. Our experience has been a partnership. Both companies are invested in making Prudential Lighting a success. When issues  come  up,  a  simple  phone  call  or email leads directly to support from SYSPRO,” remarks Ditterline.

“About a year ago we had a system-wide hardware disaster. Our servers failed and it was at that point that we found out that our backups were not being written correctly. When we contacted SYSPRO in a panic, they immediately sprang into action to help us. We spent a week recovering data, rebuilding our system and catching up. SYSPRO USA had us in touch with others on the international team and we had employees staying late with us, helping us over the weekend. We had our hands held every step of the way during that extremely trying time,” says Ditterline.

Prudential believes that SYSPRO is the perfect solution for their organization. They are no longer paying third-party service providers to bridge the gap between their software and their business requirements. The system is stable and support issues are dealt with swiftly and effectively. 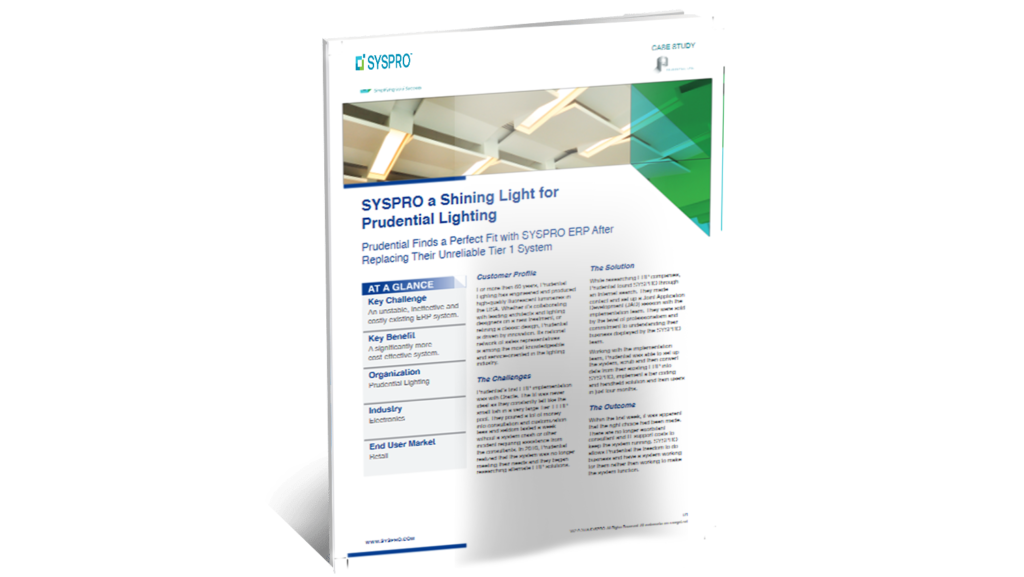